A power that creates everything in this word, From wind to water, from soil to mountains, from man to minerals. Every thing that we see round us is a creation of God or by the followers of God. This platform does not debate about the existence of the God but about the God who exists every where – therefore we say him Omnipresent.

The very first alphabet of the word God starts with the ‘G’ which stands for the creator. One who generates or creates always stands first in the world thus we revere our parents and ancestors before everything . Similarly the divine power- omnipotent- that has created the entire universe should be revered before everyone and everything.

The Hindu revere the three prime Lords – Brahma , Vishnu, and Shiva. The Lord Brahma is the first lord among the three lords because he is the generator of Humankind as well as the world as per the Hindu epics. He is the creator of everything we see and feel around us . 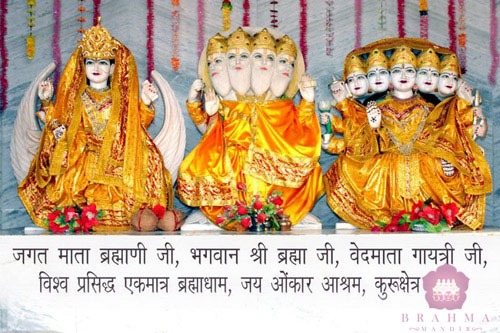 According to the Hindu mythology the origin of the God Brhama took place in the form of Kamal-Lotus- which is also known as Brahma Kamala. The lotus sprang from Lord Visnu’s Navel. And according to Manu Smriti , Brhama is a self born god . He created water and deposited seeds that became a golden egg therefore he is also known as born from hiranya garbha (golden embryo), the ball of fire, from which the universe develops. He is Prajapati, since all creatures are his progeny. He is pitamaha (patriarch), vidhi (ordinator), Iokesha (master of the universe), dhatru (sustainer) and Viswakarma (architect of the world). Brahman, the ultimate formless metaphysical reality and cosmic soul in Hinduism

Brahma is a supreme god in the trinity. He has four head each one looks towards the four directions. He is the creator of four pious Vedas of the Hindu religion. He is Omnipresent and omnipotent. He is supreme God in various version of the Hindu epics.

He also created the four types: gods, demons, ancestors, and men (the first being Manu). Thereafter, Brahma created all living creatures upon the earth . The demons were born from Brahma’s thigh and so he abandoned his own body which then became Night. After that Brahma created good gods and gave up his cosmic form once again and this became day, hence demons gain the supremacy at night . The Gods , the forces of goodness, rule the day. Brahma then generated men and ancestors , every time abandoning his body in order to make Dusk and Dawn . Thereafter Brahma appointed Lord Shiva to rule over humanity

The four head of Brahma are also the manifestation of four Vedas. The four Vedas that are the highly revere-able scriptures of Hindu religion are endowed with the blessing of lord Brahma. These are the Rigveda, the Yajurveda, the Samaveda and the Atharvaveda. The Vedas are the most precious and pious gifts to humanity and there is the greatest knowledge for the humans to live life.The composition of these Vedas are passed through the word of mouth or hymens. this is a knowledge which took the form of books at a later stage when the methods of storing knowledge come into existence. The hymns that have been passed on to generations is the voice of Brahma with the joint efforts of Mother Sarswati – the goddess of knowledge.There are many such elements that are included in these Vedas. These four celestial Vedas are the combined compositions of liturgical material as well as mythological accounts, There are a myriad of poems, prayers, and formulas considered to be sacred by the Vedic religion.

There are many things we find in the possession of God Brahma have many important aspects and have great intellectual pertinence with the materialistic world . Lotus flower which symbolizes the supreme reality that never lose your beauty and wisdom even you are born in low status. The flower is the symbol of purity and omnipresent Brahma is found sitting on the Lotus flower. It vividly manifests that purity is the throne of larger that life God Brahma. He represents the creative power.The color white symbolizes purity. Thus Brahma wearing clothes in white color depicts purity in life and Karma.

The Hindu mythology which is one of the oldest mythologies has a distinct place of revere-able Brahma. Every God and Goddess are possessed with their vaahan (Vehicle). The Honorable lord has a swan as his vehicle. The beautiful and unique bird is exclusive in itself. The bird is the only bird which can be said as the most chaste bird because of its unique quality of purifying. The bird is revere-able in many forms or by many reasons but the most surprising and special fact is it trait of distinguishing sheer milk from the adulterated milk.Brahma uses the swan as a vehicle. This is intended to convey the idea that omnipotent Brahma always bring forth the purity of his follower and never prefers any impurity in his votaries.