Life is an eternal journey and we see it as we are directed to see it. It is a fact which can not be denied – neither spiritually nor scientifically. We see things in different prospective and other creatures see them in other. This theory is even proved by scientists who work with different creatures – animals , birds and living beings. Similarly , it is a prospective that we see God – the creator in many forms , but is Brahma – the creator so easy to understand or talk about ? Brahma is the creator of this world that we see and praise about. Even the Lords who manifested themselves were always found praying Brahma. They have included His name in their preaching , Hymns , verses and sayings. Hindu Spiritual World revolves around Brahma , Brahma-mahurat , Brahmalok , Brahmaand , Brhmayuga and BrhamNaad.

Brahma cannot be explained so easily neither in words nor in verses. And having any expectation to have any knowledge in this writing is simpley void. 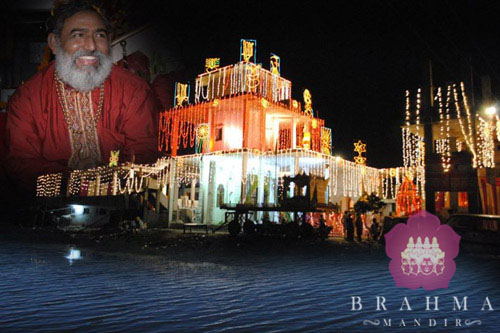 Even the Lord of Kalyuga -Lord Krishna- treid to describe Arjuna about the cycle of life and death by introducing him about Brahma and its greatest creation – the universe. His hyms in praise of Brahma are fund in the Bhagwat Gita where a little intoduction about the minscule part of Brahma’s time is given. Let alone what is Brahma even the Brahama’s one day is beyond imagination.

One youga covers 4,300,000 years . This number is multiplied by one thousand is to be one day or twelve hours of Brahma on the planet of Brhamaloka. Similarly , another twelve-hours cover the night. Thirty such days make a month , twelve months a year and Brahma lives for one hundred such years .

The above example is minusculey small about the age Brahma covers which is mentioned in the Bhagwat – Gita. It is enough to know the how powerful Brahma can be who created everything on this universes.

On 1 day of October 2001, the pious day of Fourth Navratra Samvat 2057, Monday at DHARAMKSHETRA – BRAHMSHETRA – KURUKSHETRA with the majestic willing of ONKAR SHAKTI – the Supreme Power His Holiness NIRAKAR (formless) Par Braham (beyond reach) Lord Onkara -Satguru Sri Sri 1008 Shaktidev ji Maharaj Kurri Wale laid the foundation stone the edifice .It is the only temple in the universe where Lord Brahma is being worshiped along with Mata Brahmani and Gaytari Mata unlike all other temples existing globally.

This is not an adobe for the Lord Brahma it is an aegis for the devotees who have not found any path of emancipation form the ocean of birth and death. This is a place where updesha are extorted by the Lord Brahma to find the ultimate and the only way of transcendence. The sanctity of the temple is maintained with the benediction of Lord Brahama. The hymens can always be herd emanating from the vicinity of the temple .

The temple is the home of universe and the lords of the universe. The idols of Hermit Sri Attri along with Mother Anusuyia is placed in the temple. Sri Attri ji who is the son of Brahma always showers the blessing of his benevolence to the devotees.

Dev Rishi Narad whose omniscient presence is always witnessed in all the scriptures of the Hindu Mythology is the son of Lord Brahma. He is present everywhere and therefore he is present in the temple offering his blessings to all the visitors and devotees. Merely prostrating before him wash off the misdeeds of the confessors.

God Kapil Muni Ji is the son of Rishi Kradam ji and Mother Devahuti ji . Lord Kapil Muni ji is an Avatar of Lord Vishnu. His presence in the temple fulfills the wishes of devotees.

The temple has the sacred idol of Sri Dattatreya in his temple. Sri Dattatraya who manifests Lord Brahma, Vishnu and Mahesha has a special place in the sanctum sanctorum.

Come in the aegis of Brahma and become the part of Brahma.