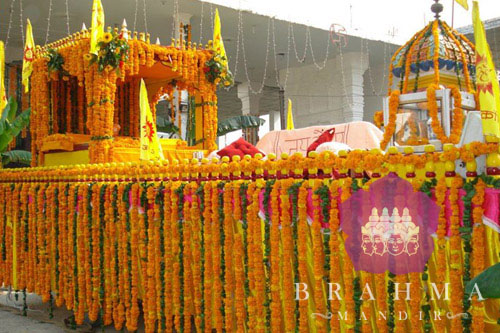 Brahma whose merely name is enough to give eternal contentment. Brahma who is self-born has made the formation of the universe and the world in which we live is the most beloved place of Brahma therfore he illuminate himself in many forms.Brahma who is abound us, who is in us , who is in every single particle which we can see or not has his presense.

In the year 2002 , jai Onkar Antarrashtriya Sevaashram Sangh innitiated the Brahma Rath Yatra by the celesial command of Onkar Shakti in the land of Kurukshetra. The sort journey in the city has some ancient relevence in the past which has great significance for humanity. Many gods and goddess crave to take part in this Yatra. They desire to take birth on the earth to partake in this holy journey.

This is a unique tour which is organised in the honour and sactity of Lord Brahma. It is popularly know as Brahama Rath Yatra . The city tour is an attempt to reignite the srapk of knowledge and devotion in the people. This institution is very old one. Infact this institution was celeberated ages back.

The tale of Brahma’s tour was one of the oldest custom whose description is found in Epic, The Vedas and Purans.

The Sakandh Puran which is one of the oldest mythologies. SakandhPuran is a collection of over 81,000 verses. It titled after Skanda, a son of Shiva and Parvati.who is also known as Kartikeya and Murugan.The mythology is an important ancient record and influences the Hindu traditions related to war-god Skanda.According to Skandha Puran , he who takes participation in this holy tour gets respite from his misdeeds of ages back. He who attends this holy tour and taking a ravolution of the holy city gets the blessing as euals to that of Ashvamegh Yaga.

A worldy beautiful charriot of Lord brahma start from one end of the city and completes at the Brahama temple in Kurukshetra on every year on the occassion of the Kartik Purnima. This custom is celeberated with a lot of pomp and show and a thaounds of devoties including localites also witness the charm of this holy tour. A thousands of hand pull the chariot whith the great devotion and pleasure.

The gorgeous chariot of Lord Brahma is the only one chariot in the world which has the ideol of Lord Brahma along with goddess Brahmani and goddess Gayatri. This rare of the rarest holy tour of the Kurukshetra city is a tour for which the naticves and devoties wait for a year to have merely a sight of the Brahma’s devine family. The holy tour whose mare glimps is enough to give eternal contentnet and freedom from maladies is being practised eversince it started and now there is a huge mass of devoties who take humble pround in making this hystorical event a sacred service.