Many are of the believe that abandoning the Grahast Ashram and seeking God in the woods or in the mountain ranges would help them to get the Eternal Emancipation – form this material word and would consign their souls in the cosmic light of God, but are we so privileged by our deeds that can give us the freedom from the maze of 84 00 000 births ?

The true devotion towards almighty can only be proved worthy of eternal emancipation – Moksha- by playing the role we are assigned to play in this world by accepting it , by living it , by enjoying it , by enduring it , remaining in it . Even the greatest of the great Lords – accepted it and lived this human life by incarnation in a very natural and normal form of a human being. His lordship brought many facets of life by unraveling a myriad of exploits which were the quintessence of lordship in a human form. They played , thought , fought , meditated , married and became the master of massacre with only one objective – to save the true innocent men and families. All those acts could not have been possible to take place if the Lord would not have come on the earth in a human form. 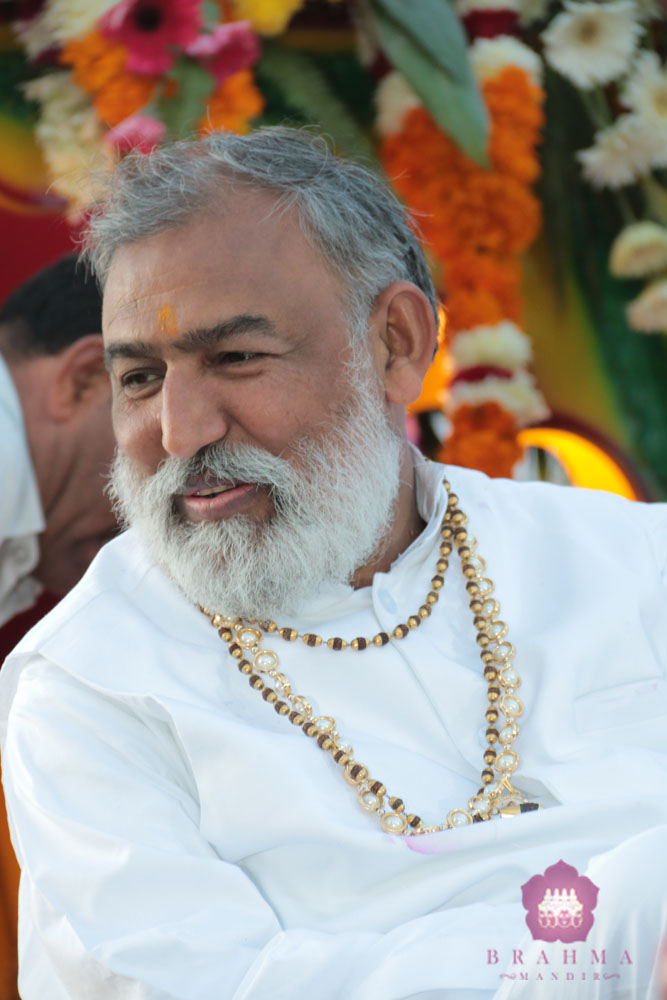 Lords come and go but a few recognize them, as it has happened with all the sages and the Gurus. They are not easy to recognize but impossible to forget.

But they come, whenever there is a decline in Dharma and increase in adharma, the formless omnipotent almighty comes on the earth in many different guises.Recent, in order to save the religion and emancipate the downtrodden for the benefit of the social bandages and fraternity in the world , Sri Sri 1008 Satgurudev Swami Sri Shaktidev ji Mahraj form Kurri village has incarnated in a human form in order to bring light in the dark lives of the whole humanity.

On 5 December 1997 the celestial light of Onkar almighty fell on Sri Sri 1008 Satgurudev Swami Sri Shaktidev ji Mahraj and ever-since the honorable Guruji dedicated himself in the service of the world.

The birth of the Gurudev ji took place in a very pious Brahmin family on 16 December 1958. There can not be any doubt or any surprise in this miracle in the home of Sri Dixits whose imposing pillar or imposing guardians themselves were the incarnation of God Narayan and Goddess Lakshami. That is why the name ,which is one of the names Narayana – Sri Ram , of his father was Brahama Swaroop Sri Babu RAM Dixit and his Goddess like mother – reverable Sri Lakshami Amma. The birth of Guru ji to the patents is the outcome of their meditation , sacrifice and pray to the God of thousands lives that has brought down the celestial light in this world in order to brighten this world.

The Guru ji – Sri Shaktidev ji Mahraj form Kurri village – is a heavenly soul in a human form he is form the lineage of Lord brahma. Rishi Durwasa ji Mahraj was the son of hermit ‘Sri Attri Ji Mahraj’ and Sri Atri Ji Mahraj was one of the children of the Lord Brahma. And hermit Sri Durwasa ji who himself was the Avar of Lord Shiva. In an epic the reverable Mother Sati Anusuia – better half of Hermit Attri ji – gave birth to the Gods of trilogy or Trinity- Lord Brahma , Vishnu and Mahesha. Lord Brahma was born in a human form of Chandra (Moon) ,Lord Vishnu was born in human form of Dettatrey and Lord Shiva was born in the human form of respectable and revere-able hermit Durwasa.

Since 5 december 1997 , Satguru Sri Shakti Ji maharaj devoted himself to the divine throne by emancipation himself from the grief and pleasures of the world . He is the worthiest student of rishi Durwasa and therefore Durwasa ji mahraj liked his human cloak and promised to wear the human cloak for 47 years to fulfill his ages old longing to serve the world and his father – Lord Brahma.

Brahma temple is the desire and devotion of Satguru Sri Shakti Ji mahraj who had the notion of the perennial and spiritual bondage God Brhama and Goddess Brhmani. He could could not resist the dichotomy between the duo since ages. On 1 October 2001, he accomplished his ages back dream of getting them meet at a same place by helping to build the Lord Brhama’s temple. Lord Brhama’s temple consists there idols of Goddess Brhamani, God Brhama and Goddess Gayatri. This temple is situated in Kurukshetra.The foundation stone of this holy place was blessed by hermit Durwasa ji whose divine soul resides in the human form of Sri Shkti Ji Maharaj resolved to erect the temple with his hard earn wealth in order to fulfill his ages back resolution.

Mysterious are the ways of God.

Sri Shakti Ji is candid stature of lordship who has not only devoted himself to the service of humanity but also to the service of nation. He understands and also has also been assigned by the supernatural bodies to serve the land where his heavenly light has kindled. with the spirituality in his blood and doctrines of national service in his mind he adhere to the contours of his pedigree of teaching as being a brahmin. The task of edifying people he fulfills the Karma of his lot by playing the resplendent character of a teacher. Your excellency edify or teaches in a Govt. school. You are a well educated persona with M.A. in Sanskrit from the Kurukahetra University. Your erudition in the ancient and abridged language of Sanskrit has won laurels. You have also been awarded with the gold medal form the Jagatguru Sri Shankaracharaya ji Maharaj. You have been a sincere student since childhood. You always remained in your own world of spirituality and service. You always believed that there is a force that has been running this world which is unrecognizable and unpredictable.

In this world all parents want their children to marry and extend the world. You also followed the footsteps of lords,hermits,sages and Gurus by giving a knot to the sacred and heavenly relation of marriage with mother Inderjeet whose spiritual name is Sri SRI 1008 Satguru Santosh Onkar ji Maharaj. The mother Sri Santosh Onkar was born in Ambala district on 10 February 1964. She was born to the parents – Sri Guru Prassad ji and Sri Shanti Devi Ji. In the year 1999, your highness was conferred with the name Sri Santosh Onkar from Sri Sri 1008 Satgurudev Swami Sri Shakti ji Mahraj form Kurri.

Your arrival in the eternal journey of Sri Sri 1008 Satgurudev Swami Sri Shakti ji Mahraj form Kurri has filled the gap on the throne of Kurri and blessed the million of millions with mother’s love,affection and care. You shower the blessings of contentment and compassion in the lives of many who had been seeking the warmth from the mother nature.your Majesty has helped the beginning of Jai Onkar internation sangh on 10 May 1997. which is the ultimate aegis for the deprived , downtrodden and devotees.

The mother nature has complete faith in your bondage and has blessed you with three goddess like daughters – Devi Puneeta ,Devi Kavita (Kuldeep)and Devi Jyoti. All these goddess in human incarnation are the benedictions of Goddesses Saraswati ,Lakshami and Parwati. There birth in you larger that life cottage are the boon of all the Mother Goddess whose affection and love you have won by incessant prayer and profound devotion.

The lineage of Sri Durwasa has a myriad of deeds to be performed in this world where the darkness of ignorance has clutched many people. To bring them to the light of eternal emancipation you are also blessed with a son – Sri Sri 1008 Satguru Swami Sri Sandeep Onkar ji Maharaj. His light of birth fell in your celestial cottage on 16 September 1990 early in the morning at 6.34 at his ancestral home Kuradi. The blessing of lords Brahma’s son hermit Sri Attri ji is always with you who has blessed you with his powers and prowess of him to take care of the sacred seat of Kuradi.